The piece is a head piece, held in place by a cast dagger.

The shagbark hickory provided nutmeat which was traded with the settlers, it also withstood the native american practice of brush burning to regenerate the woodland.

This piece is informed by a period photo:-

native american artifacts and the Donghri Kund (in Orissa)

It is held behind the ear by the bronze dagger.

I also sampled making a dagger head in stoneware based on a native american pipe.

While I was working on the Hickory bark headpiece I did this piece for fun. I have no idea what the seedpod is, it is from across from the New Paltz Sally Army. 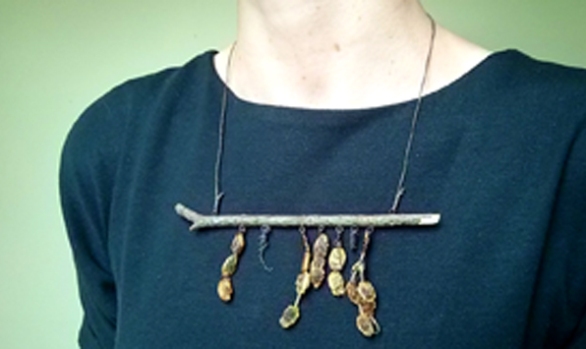 Again their was inspiration from a native american photo: 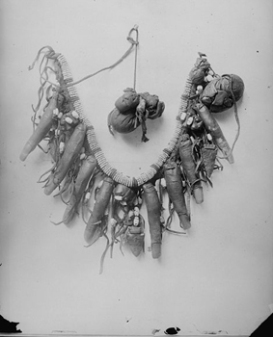 My last project for SUNY spring semester Wheel Throwing was not thrown, but extruded and then coil built. It was quite a challenge to get the individual tulip vases balanced. The photo shows two of the three final vases, The design was based on tulip stems so the tulip flower heads could do their fading thing with some support. The three vases can be rearranged together to give different forms. They remain in New Paltz being nigh impossible to transport.

My first undiscovered landscape piece that draws inspiration from the land around New Paltz NYS.

The black walnut was a tree used by the native Americans who managed the woodland and planted walnut and other nut trees. This walnut is from Huguenot Street in New Paltz. 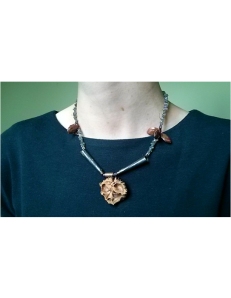 An early model used the native american tinkle cones to give a surround to the walnut and had the finger prints nearer the central piece.

This is the piece nearly finished. At end of term crit Jamie Bennett suggested the piece was insufficiently original, I quite like that it is unassuming, but I think I prefer an earlier version with copper beads, there is too much labrodorite – chosen as having stronger links with the locality than the copper. I might revisit it to make it more to my liking.

The first half of semester was spent making 20 cylinders to practice surface decoration on; 5 mugs to practice handles; 5 jugs to practice lips; and 5 lidded vessels to practice making to measurement. They were glazed in the second part of term and so are just making the blog now. Mostly they haven’t come back to the UK, but my new skills have! 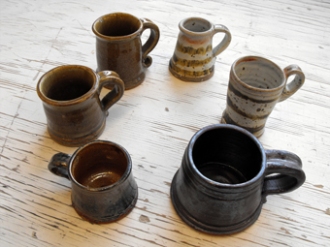 Our penultimate Wheel throwing project was two, themed dinner settings. I chose the Seven Ravens as I’ve been looking at fairy tales in casting. And I themed the project around David Huycke’s stacking bowls going for shape rather than purpose. The decoration on some is scraffito ravens’ heads and on others is wax painted ravens’ footprints, a couple of pieces have a key inscribed onto the base.